While you’re staying in Cozumel, don’t miss the opportunity to help out animals in need of love, affection, adoption and even transportation to their ‘furever’ homes.  There are SO many animals that are neglected, abused and unwanted.

When we are on the island, my son and I ALWAYS spend time at the shelter playing with the animals and bringing supplies.  Yes, it’s hard to see those precious animals in a shelter environment.  Yes, we always want to take all of our new four legged friends home with us.  Yes, we always feel like we made a difference in those animals lives when we leave.  It’s worth it.  🙂

Volunteer at the shelter.  It is so important for the dogs and cats to get individual attention.  You may walk the dogs or play with the puppies and cats everyday 11am to 1pm and 3pm to 4:30pm.  Children must come with a responsible grown up.

Donate money or items.   Find out what the Humane Society needs and bring those items to the shelter.  Sometimes, they need things that are trash to us (old newspapers and towels).   Sometimes they need dog food, cat toys, pet carriers or collars. Just give them a call to see what would be most useful.  If you’re short on time, you may always donate money via their website.

Be a travel ambassador.  Sometimes people in Canada or the United States will adopt a pet on the island and those guys need help getting to their new ‘furever’ home.  You may assist by traveling with a pet back to your area.  The new ‘parents’ will meet you at the airport and pick up their new ‘fur baby’.  All paperwork is completed for you and there is no cost to you.

Adopt.  If you fall in love with a new fur animal, the shelter will make sure you have all the paperwork in order for easy travel back to your country.  There is NO quarantine time.

Please be sure to visit the Human Society in Cozumel.  Even if you do not want to give a pet a new forever home, please stop by to spread some love.  The animals LOVE attention and any time spent there is special to all.   To learn more about the Humane Society, please check out there website:  http://www.humanecozumel.org/ 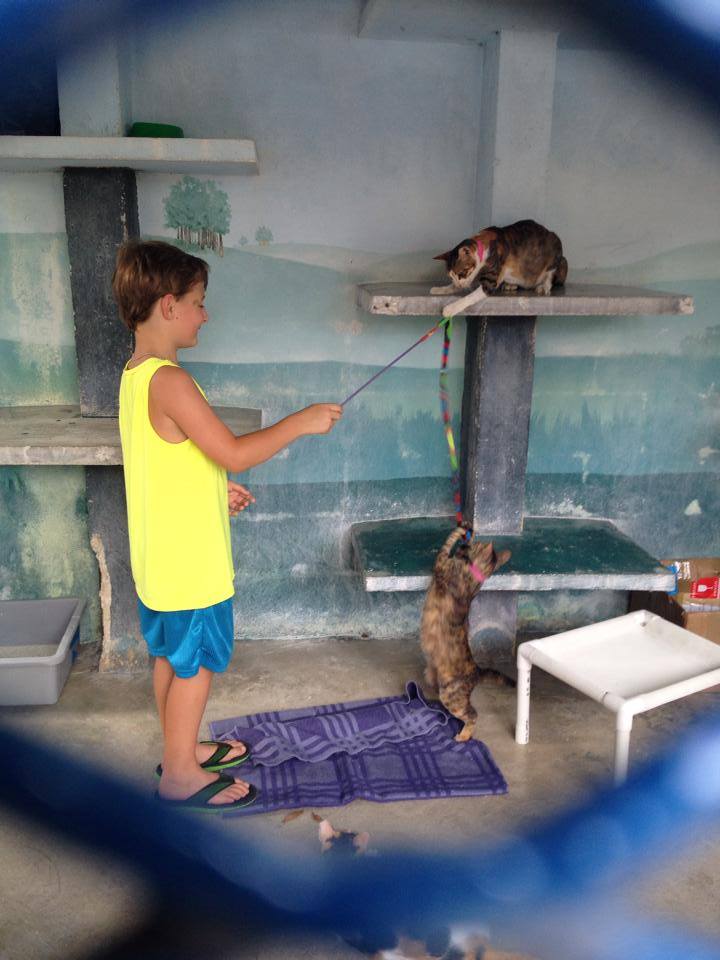 Well, my husband and I spent one month on the island of Cozumel and spent 3 of those 4 weeks sprucing up Casa Cascada.

These are just a few things that we worked on…
New landscaping around the pool
New landscaping in the Fishbowl garden
New landscaping in the main garden and the exterior wall
New grass in the main yard
Pressure washed (and scrubbed) the pool deck and walkway
New solar lights in the gardens and the party deck
Re-Stained and sealed the exterior wall front door, garage door and front door to the house
Touch up painted inside and out
Painted the security bars downstairs
A multitude of minor (but annoying) fixes that had been overlooked (replacing a broken lamp, new toilet seats, unplugged the rain shower heads, etc)
We also had a LONG and difficult discussion with our property management company.  The house just wasn’t up to our standards when we arrived and it literally took us 3 weeks of running around scrambling to get the house back to how WE wanted it.  Now, we have a NEW POOL COMPANY and a NEW GARDENER!!  Needless to say, this was a big learning experience for us.
Also, there is a new great restaurant right across the street, El Cocktelito.  They have the best ceviche (and cold beer).  In fact, I think I had ceviche 3-4 times a week since we would stumble over there after long days of working on the house.  Oh, and the few times we couldn’t even drag ourselves across the street, they delivered!
Hope you like the improvements!  We have plans to stay for a month next year and we plan to add the roof (and lighting) to the party deck and do a few other large improvements.

Mark your calendars for this
diverse water-sport based event that will take place here in Cozumel
from December 6 – 9. Included in the program are a lion fish safari, a
windsurf regatta, a surf expo and even tributes to both Jaques Costeau
and Ramon Bravo. In addition, there will also be cultural
presentations, Divers Alert Network Seminars and more. For more
information on the event, check out their webpage. http://www.cozumelfest.com/

photos by Bonnie Pelnar, article by Jen Pobiak
Bonnie Pelnar, from Underwater Colours, was teaching a photo workshop at Scuba Club (which she does bi-annually) when she managed to capture these amazing images of False Killer Whales (Pseudorca crassidens) underwater. Since it was during one of her photo-seminars, everyone on board the Reef Star was a photographer. We had just finished our dive at  San Franciso Wall and were heading north toward our second dive site, Santa Rosa. The captain shouted that he had seen whales and we started noticing several pods making their way north. There were at least 60 or more as they were cruising along side our wake and surfacing right along-side our boat, as well as along-side several other dive boats in the vicinity. After watching them for 15-20 minutes, several of us jumped in with snorkel gear and cameras.*
While we were in the water, several of the curious whales came to check us out. A friend of ours, Kevin Frillman, can be seen in one of the photos freediving with one of the whales. We saw him dive down and slowly turn and the whale did the same in synch! I had my own special encounter as two of the whales came toward me and circled me, one coming within arm’s reach. I cannot even begin to describe the shivers that I felt as I made eye contact with this beautiful, intelligent animal. It was an absolutely amazing experience. It reminded me that I am just this small entity, this little fish in a huge sea, yet we are all connected. There was this beautiful intelligent animal and we had this encounter for just a moment. It went on with its travels and I will be going on with mine, but I will never forget it as a constant reminder of just how precious our oceans resources and animals are.
*It is recommended to exercise great caution and not get in the water with these whales. Although social, there is no real documentation of how these wild animals interact with other species. The people in our group who entered the water were advanced scuba divers and photographers with past knowledge and experience of snorkeling and diving in deep waters with marine life.

Quintana Roo Governor Roberto
Borge Angulo was named Peace Ambassador, and the state was designated as the
2012-2013 World Tourism Capital for Peace by the World Organization for Peace
(WOFP) on Sunday.

These honors were given to
the region because it is considered a model for outstanding cultural and
tourism programs, as well as the preservation and promotion of Mayan culture,
the kindness of its people and its quality of tourism services.

During the event, the
governor said that the awards will serve to showcase to the world the region’s
tourism and culture. He was accompanied by Quintana Roo Tourism Secretary Juan
Carlos Gonález Hernández; the WOFP Director for Mexico, Central America and the
Caribbean Danclair Darío del Valle Hamilton; and WOFP consultant Juan Pablo
Mirabent Pizarro Suárez.

After receiving the
lifelong honorific of Peace Ambassador, the governor spoke about the
significance of Quintana Roo’s programs being recognized by the United Nations
as a model for building a better world.

He said that the awards
imply more responsibility and new challenges, and that he will continue with
the intense task of promoting the region’s cultural, archeological and tourism
treasures, as well as increasing the quality of services, infrastructure and
life of the people of Quintana Roo.

“Quintana Roo was selected
among eight important international tourist centers because of its
sustainability, organization, and quality services and activities. It was
judged for its archeological sites and splendid culture, as well as the
people’s dedication to service, and its pleasant year-round climate,” he said.

The state of Quintana Roo is an amazing, diverse and safe place to visit and live.  Cozumel is a wonderful jumping off point to experience the history, culture and wildlife of the Yucatan.  Be sure to stay in your home away from home.

Cuban Born Deborah Andollo, holder of 16 world apnea records, including one in both the masculine and feminine categories, has recently relocated to Cozumel and opened up a freediving academy. Academia Blue Yemaya is the first SSI facility in Latin America.

Deborah, who has an amazing 6 liter lung capacity, teaches breathing techniques, relaxation, and even meditation to safely practice the sport. She speaks 4 languages, English, Spanish, French and Italian. Her husband, Eric Testi, is from Luxemburg, also speaks 4 languages and oversees the operation of the Academy.

May 15th is the official start of the 2012 turtle nesting season
according to the Comité de Protección a la Tortuga Marina. Brigades in search
of early nests have already discovered 10, nine of which have been discovered
in Playa Box, located on the eastern side of the island.

Cozumel is fortunate to be a protected breeding area to two species
of turtles, the loggerhead (careta careta) and the green turtle (chelonian
mydas). During the months of May through September these turtles come ashore to
lay their eggs on Cozumel’s eastern beaches. Sea turtles generally lay between
150-200 eggs each time and can nest up to 6 times in a breeding season. The
eggs take around 60 days to incubate before the baby turtles head toward the
sea.

Cozumel and the neighboring areas are a safe place to visit, according to U.S. authorities.  In early February, the U.S. State Department updated their Mexico travel warnings.  The entire Mexican Caribbean has been specifically excluded including the entire province of Quintana Roo and Cancun, Cozumel, Playa del Carmen, the Riveriera Maya, Tulum and the province of Yucatacn, including Merida and Chichen Itza.  This area is so far removed from the U.S. border and other areas where drug-related violence occurs, that U.S. citizens are now being given the green light to visit.

View the full article on the Official U.S. Department of State website.  And then go ahead and book your trip to the safe (and fun) island of Cozumel!